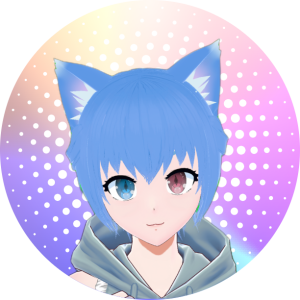 A bakeneko VTuber born May 17th, Nao Nyan is a variety streamer who loves to play Phasmophobia, BOTW, Dark Souls and Pokémon. They love singing and voice acting, and wants to make their own music some day.

Nao Nyan is a bakeneko who once wandered across many dimensions before finding themselves in ours. Adopted by the immortal Lieutenant Blythe they befriended many other VTubers like Cane Iko, Neon Nya and Yumiko Tokunaga before dragging a fellow other-worldly being called Zhadow into the chaos.

And speaking of chaos, they are also friends with the Personification Of Chaos also known as Zero Fujibayashi, which have lead to many interesting events... Zero have taken to calling them Derp Cat and constantly threatening to donate both for fun and as a revenge against Nao after they shared The Forbidden Tweet. Or as you could say: he is revenge simping.

Nao loves video games and "snackies", as well as the occasional headpat and will meow and purr to help sooth the stress of the day away.

They are also a complete scaredy cat, and usually scream a lot when playing horror games. To which some viewers like to bully them by playing scary sounds during Phasmophobia streams...