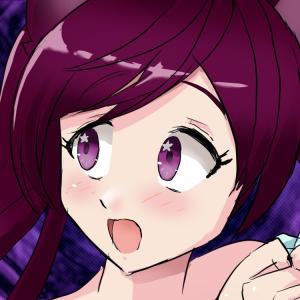 Saralene is a female catgirl English retro gaming VTuber who plays things from just about any genre. She tries to keep a positive and encouraging atmosphere and virtually never gets frustrated at video games.

She is especially fond of rhythm games although she rarely streams them due to fear of DMCA. She also adores pinball and is known for her pinball wizardry. Her favorite pinball table is Cirqus Voltaire, and her favorite rhythm game is Pop'n Music.

She is also known for her game development background, having worked for companies such as XSEED Games among others as both a Japanese to English translator and a programmer, with over a decade of experience.

She considers herself a retro streamer as retro games very much dominate her stream choices overall, though she streams modern games on occasion as well.

Her exact background is unknown, but she frequently refers to herself as "Saralene the Magical Catgirl." It can be inferred from this that she is some form of magical girl. She seems to be a video game developer by day and a magical girl fighting the forces of evil by night.

Her current arch-nemesis is the Great Emperor of Dogs, who has often trapped her at the top of trees outside of her house with his vicious empire of evil dogs. The Great Emperor of Dogs is a scoundrel with a captain's hat and a huge scimitar who hates Pop'n Music and believes the best music game ever made is Spice World for PS1.