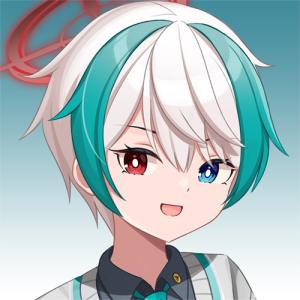 Kyoshi Akazora (赤空キョシ) is a male Filipino Dual-Avatar Virtual Streamer and YouTuber whose content focuses on game variety. He is seen live everyday on YouTube (9PM EST) and every 2 days on Twitch (9AM EST), with some of his Twitch content being uploaded on YouTube as well.

Known to his viewers as a gummy-loving Tsundere, he's really bad at taking compliments. Although this does not stop him from making high pitched moe sounds. He seems to exude chaotic energy wherever he goes, especially if it's with friends. But is still capable of being chill at times when needed.

Kyoshi has said that he's working towards growing as a big independent VTuber so that he doesn't have to be under control by a third party organization. His reasoning being that he wants to help as many smaller VTubers as he can when he eventually grows bigger, without limits on who to collab with. He has shown heart and passion for VTubing as stated in his first "Just Chatting" stream on YouTube and his pinned Tweet, and is consistently encouraging newer VTubers to never give up and to keep doing what they love.

Akazora Kyoshi is part of a race of Dragons that are adept in the art of Polymorph. Because of this, his race is hunted by humans and have decided to exile themselves on an island in the Bermuda Triangle. Kyoshi grew up not knowing what humans are, and because of his boring life at home, he decided to abandon the island and visit humans for the first time.

He ended up at a cosplay convention as a result and was given the misconception that the "Nekomimi" cosplayers are what humans looked like, so he polymorphed into a Neko-girl despite his male gender.

He got popular enough that he was attracting too much attention from those that hunt his species, so he polymorphed into a normal human later on, replacing his Dragon and Neko form. Although because of his genes also containing Kitsune DNA from his biological father, he accidentally polymorphed into a Kitsune while changing his Dragon form, although this has been rectified.

His personality switches between the two avatars, with his Dragon being a calm-oriented, although slightly unhinged Tsundere.

While his Neko form is a more chaotic, childish, and short-fused Tsundere.