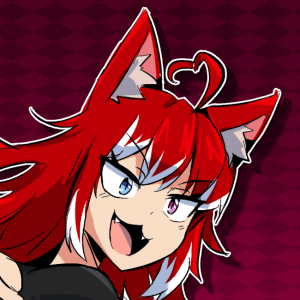 Yumiko is a Virtual streamer/Youtuber that makes English content. She primarily focuses on Video gaming, with a heavy emphasis on VR gaming with VR Chat and Beat saber, mixing in a variety of other games every week! She is friendly, chaotic, filled with gremlin energy, who is approachable and encourages everybody who watches her to talk with her and the rest of her chat, building a community that is welcoming for everybody!

While her content is not necessarily adult themed itself, she does not cater towards younger audiences and is frequently seen making crude remarks and jokes. Yumiko has built a reputation for being transparent with her audience, being real and genuine with them, showing off behind-the-scenes processes that got her into her work and showing off the things she's passionate about!

Yumiko was born into another world created by two deities— one of fire and the other of ice —who have long since passed. Her world was once the nexus of travel to many other dimensions. However, after a great conflict, it has returned to nature due to an apocalypse.

Growing up as a young cat, Yumiko had learned to survive on her own in this world, working on the clues not only to her past heritage, but what had happened to the world she was born into. Eventually, she grew tired of the loneliness and wished to explore other dimensions; then began to search for how the old civilization traveled, hoping she could repopulate the world she lived in.

Eventually, she learned how to travel across dimensions and built a Tavern in an attempt to bring people to her world and service the patrons in hopes of repopulating her world. Wanting to try something new, she eventually grew more ambitious and decided to learn more of the worlds around her.

Taking an interest in idol culture from one of the many worlds she visited, she decided to try and become a punk-rock idol—not letting anything stop her! She took up residency in a city called Neo Nekyo, in a world very similar to Japan of Earth; she started making a name for herself in the city as well as on a website called Twitch. She started to hire some of her following from Twitch on as help for her journey to the top, providing cookies to them as compensation (that allegedly were stolen).