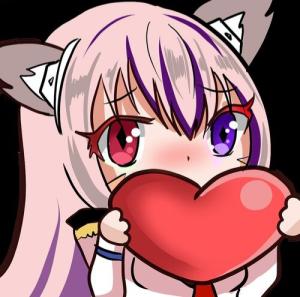 Eria Mitsuki, also known as Eri or Eri-nyan is feline beastfolk girl, and engineer coming from northern country called Finland. She fights against bad vibes together with her friends and her squad Bubble Fleet. Bubble Fleet is usually equipped with nonlethal water guns but Eri herself is wielding a gunblade called Codex Breaker VAR. Due her peaceful nature Eri rarely uses it in combat but instead tries to resolve conflicts with talking.

Outside Vtubing Eria is captain of warship called Tempest, doubling as Eri's workshop and headquarters for Mitsuki Ironworks. Using the resources and funds of Bubble Fleet, Eri researches new VAR gear and ancient humanoid warmachines called Aquaroids. Due her passion for both and profinency with using the VAR system she is in fact often mistaken as one of Aquaroids instead of beastfolk.

Alternate self called Crystal Lord Ria also exists. Originally time traveller from year 2011, she has found herself in year 2022, known as Crystal Chronicle as era of the Vtubers in accident. Despite she would have enough mana in magic circuits to return own era, Ria got more interested about phenomenon naming the era she was now and decided to become Vtuber.