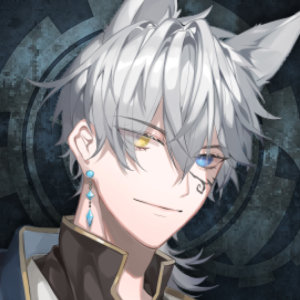 Emerson is a time traveler on his way to becoming the next god of time, published author, singer-songwriter, guitarist, designer and a gremlin at times up to all sorts of cursed shenanigans. He streams a variety of content including cover and original music, art and design, readings of poetry and discussions on literature, ASMR, collabs and podcast and music shows with guests, and of course his first chaotic forays into games.

Emerson Key was born in 1902, with a dormant gift for perceiving and navigating fourth and fifth dimensional planes. As these abilities were awakening in his teenage years, he was recruited into the Continuum Confederation, an organization which operates outside the dimension of time. He was mentored under esteemed time travelers and mages, and nominated to train to become a Chronomancer, one of the few master archmages and gods of time, granted the Nebula of Time for use and safekeeping.

With his future already charted out in its infinite possibilities, he currently has been working up the ranks as a Causality Chronographer for the Confederation, recording and investigating timelines across the multiverse to ensure all runs as it should. For many years he has traversed many universes and timelines, enforcing the rules of time, eliminating threats as necessary and otherwise maintaining archival responsibilities. Remaining ageless and unaffected by time, and seeing all that could be seen, in infinite quantum possibilities, he has become restless and cynical with the rise and fall of species and civilizations.

Recently however, he and his fellow Continuum agents discovered an error which is beginning to cascade and cause ripple effects across timelines. In order to stop an unforeseen and unapproved calamity he has arrived in 2021. With the help of his community and many other fellow time travelers, perhaps the calamity and the source of the problem may be stopped.

However, things are not as simple. Unfamiliar with deeper involvements outside of shepherding timelines and beyond fate as the future has shown, will Key choose sides when he discovers the forces behind it all? Will a titanic clash between otherworldly and mythic powers be the end of the universe as we know it? Or will the Continuum Alliance succeed while Emerson Key unlocks his true potential as a Chronomancer?

He must embark across worlds and timelines, physical, spiritual and digital, to take on battles and investigate how to stop the unstoppable.