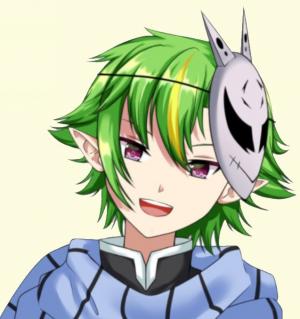 Anzu is a Vtuber who streams mostly games in his channel. He mostly playing puzzles, RPG, Survival, Strategy, etc. Sometimes collabing with other Vtuber too playing phasmophobia, Left4Dead, etc.

He also host Project Zomboid game server to play together with other Vtuber.

He is bad with FPS or competition games thats why avoiding playing games like Apex Legends, Valorant or something similiar but still do it if invited for collab just for fun (not for ranked or tournament).

He sometimes collabing with other Vtuber either using Indonesian, English or Japanese and open collab for anyone who interested.

Spirit of the great tree which born in a shape of young wood elf and raised as an elf. Become an adventurer in his home world (Stellaria) and when doing his first quest as an adventurer, he got hit by isekai truck and sent to japan along with his partner slime. Addicted to earth's entertaiment like Games, Anime, Idol, and Vtuber, he decided to become Vtuber too himself while playing games.