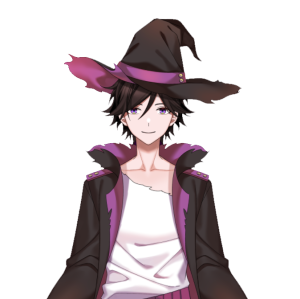 A former adventuring wizard turned dungeon master Vtuber who plays a variety of games, runs Dungeon and Dragons one shots, and writes Webtoons. As a dungeon master it is their goal to make fun and interesting stories for the audience be it in games such as dungeons and dragons or their first Webtoon comic DiM. They enjoy a variety of games especially those with lots of memes such as Yakuza. Greatly enjoys streaming with others and often invites friends and fellow Vtubers to games of dungeons and dragons.

Formerly an adventurer who tragically lost his entire party in one of his first explorations. During the tragic loss of his party he found within the very dungeon that claimed their lives an ancient tome that detailed that magic used to create, alter, and control every aspect of a dungeon. With it he quickly rose in fame both as a wizard and an adventurer but with it soon came a deep boredom. Neither he or any other adventurer had any challenges to face, and worse yet the dark forces the adventurers strove to battle only grew stronger as they became weaker. And so Vibe came up with a plan. Using his new powers he sunk his own wizard tower into the ground and from it began to create a vast dungeon ever shifting and forever challenging those who enter. As the new dungeon master he now challenges adventurers to enter and claim their treasure and strength, all the while sating his boredom.