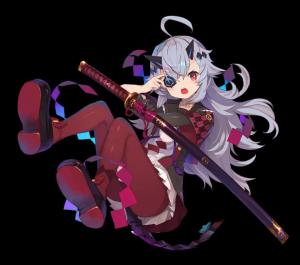 Ojiki-chan is a Babiniku female Vtuber from Japan. She has been streaming for several years and previously used the channel for making Voiceroid content. She now shares the channel with her English-speaking little sister Reiny, who debuted on 6th March 2021.

Ojiki-chan mostly speaks Japanese but can speak some English. Her streams are mostly catered to a Japanese speaking audience where she is praised for her deep and radio-like voice. Ojiki-chan has also been on mainstream television in Japan twice due to the uniqueness of her voice.

Her mama is Shindo Kamichi and her Live2D mama is Homuragi Pyro (new model) Ojiki-chan also has a 3D model and sometimes does VRChat streams in various outfits. Her 3D model was created by Tomori Mikage.

Ojiki-chan's design is inspired by Masamune Date, a Japanese ruler and tactician in the Edo period famous for only having one eye.

Ojiki-chan is the leader of a Yakuza family and company named D-tail, creators of the "Little Sister" prototype android named Reiny.

Ojiki streams as a way to promote and endorse the D-tail line of household androids soon to take over the market and also as a way to grow the family into a more powerful and fearsome company.