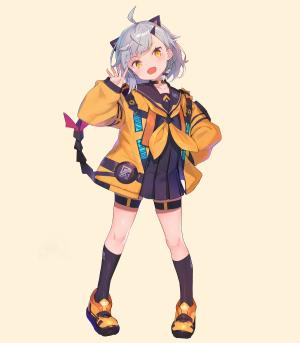 Reiny (レイニー) is a Female British Virtual YouTuber who debuted on 6 March 2021. She shares a Youtube and Twitch channel with her older sister Ojiki-chan, although both girls are mostly active on Youtube.

Reiny can communicate in English and some Japanese and tries to cater her streams to both audiences. She is mostly a variety gamer but also occasionally does illustration streams and karaoke as well.

Reiny's mama is Shindo Kamichi and her papa is Taniya Raku. Reiny's 3D model is currently in development and will be available for the general public to purchase for use as an avatar in games and for other activities.

Reiny is a Dragon-type Android created by a Yakuza-backed company called D-tail and lead by her older sister, Ojiki-chan. She is currently undergoing performance testing in the UK and her Operating System is in English. Reiny was created to be a prototype model for her mass-produced android "little sisters" which will become available to the public as service androids.

Reiny is energetic and cheerful. She sometimes curses and gets scolded by her sister for using bad language. Reiny gets embarrassed easily and it's a running gag among fans that she has a tsundere or cat-like personality. She is often mistaken for being a cat which annoys her.