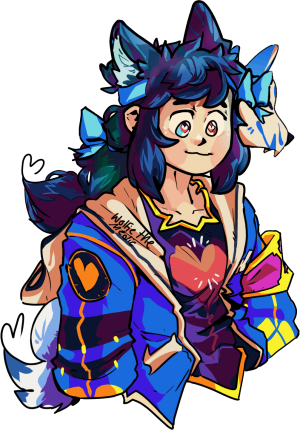 Hailing from a cyberspace city surrounded by neon lights, Wolfie herself is the oblivious and mysterious being adorning many titles. This adorable-as-heck, wholesome, workaholic, celestial angel artist serves as a shapeshifting seiso spirit wolf with wild curiosities. Though her own past and knowledge are unbeknownst to herself and others, it leaves much room for the imagination.

She now spends her leisure doing her best to make those around her laugh and the world a better place than it was before. In her eyes, the most valuable currency is the happiness of others, so all is done out of the kindness of her heart and hopes it only spreads. Producer and consumer of love and good vibes, she originally inhabited Mars, arriving at different destinations by her Space Train. Don’t call her an alien though, she’s Wolfie! Monetarily, she's dead broke per se, instead called being creative. Her old past-time studies were being a combat field medic, so please allow her to patch you up.

She doesn't present a distinct personified voice, instead of relying on her computer-girl creation to synthesize Text To Speech communication, if she isn't mimicking soundboard vocal cords or being a Vocaloid that is.

If she isn’t working to the bone in productivity, you can spot her spitefully lounging and resting; it’s not hard for her to get too comfortable and fall asleep. Breaks are a foreign concept in her mind, so it’s all energy or no energy with no in-between. A quirk she has is being barely capable of manifesting her own dreams and instead hops throughout others’ throughout her unconscious nights.

Of the many jobs she juggles is solo operating a popular pop-up bar inside a gigantic, heavily repurposed train, themed to match herself and her love of tech and retro with some steampunk for flair. It still runs but where we're going, rails don’t hold us down. When it comes around your area, it’s a roaring gathering spot that constantly moves around night after night. No one dares to threaten the sanctity of the barkeep, patrons, or the safe haven itself: here’s the hot spot to lift spirits. She also loves performing bar tricks and shifting shapes on top of that to entertain, but most of the time she's self-conscious with a brave face.

However, she has countless other duties: such as streaming, animating, working as under heaven’s detective, and running a very totally real cat maid cafe that definitely exists. There is an emphasis on both herself and an independent workplace being periodic. That being said, The Top Hat Cafe with cat maids absolutely very much exists, hop aboard another compartment of the massive train! However, it’s more considered so much as a side hustle joke, arousing confusion if it actually is or isn't real. Many of those who work there are VTubers gathering up a wage or friends who lost bets, come meet the crew or join ‘em! Her own VTubing takes place in the back office messing around, where it's wired up in entanglements of tech, a stowaway section of the train only a bean-like her manages to hide in. The train moves between Earth and mortal layers, but heaven doesn't actually know she has all these side jobs. And for what? Just for everyone's smiles, that's all!