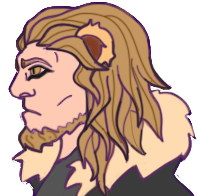 "Hello, My name is Leo Dickinson, I like sumo and heavy metal, I have X fall guys crowns, and I love my girlfriend."

Just like his opening phrase suggests, Leo is a vtuber of many interests that would betray his initial appearance. Many streams are labelled as "chill" or "cozy," playing minecraft while listening to heavy metal, or a visual novel featuring yuri and nurses. His most famous and viewed streams are the ones wherein he covers the sumo wrestling tournaments every two months. He is very insightful and knowledgeable about the ancient Japanese sport and if you want to learn more about Sumo then you should tune in to Leo!

He is currently independent, and plans on creating a twitch team to support Male Vtubers when he becomes twitch partner.

After coming off of the savannah to kick ass and play video games, Leo wanted more. He has begun the process of amassing an army by combining the forces of anime and heavy metal to create the AniMetal alliance. He will one day take over the world.

He is currently re-writing his lore to include his wife, Princess Arden, in his backstory.