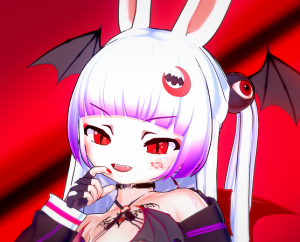 Alice C. Alucard is a cambion rabbit who holds the title of "Princess of the 7th Hell" in Albelheim, a realm of 7 hells.

Alice enjoys playing video games, streaming, watching anime, reading manga, modeling, seducing and teasing people. She enjoys pizza (and will on occasions eat an entire box to herself. She enjoys expressing herself in sexually enticing ways given the perfect opportunity. She mostly loves relaxing and taking days slow and casually.

She's a loli demon vtuber, who usually does Just Chatting stream on Twitch and can be quite vocal when it comes to her opinions on things when it comes to the freedom of expressions, considering she comes from the restraints of boredom in the 7th Hell. While she may come off as a bitch to some people, she's actually pretty respectful, but only to people who she thinks deserves her respect. Outside of streaming, she does photoshoots of herself for her fans.

Currently Alice is a V-katsu/Koikatsu model

Born in Albeheim, a realm of 7 hells, Alice was given the status, Princess of the 7th Hell. Her duties were to manage the 7th Hell and see to it that her subjects were watched over with the power given to her by a legendary demon king known only as "The Red Man", who no one living in Albelheim has ever witnessed, but only heard of and the princesses receive a portion of his power, enough to govern their respective hells. The proof of their power is marked on a body of a chosen princess, represented by a red eye with a black insignia encircling around it, representing which hell they control.

In Alice's younger years, she had once snuck out and walked amongst the land of man, who many of Albelheim refer to as "The Surface", using a demonic spell book, which she stole from her father's room, with the purpose of seeking vengeance against "The Church", as her father, Crul Alucard, calls them, for the death of her mother, Rosemary Crestfallen. She had no idea how she would act out her revenge, other than killing any human she came across. After killing a few humans, who tempted to claim her and sell her off her rabbit ears for riches, as rabbit-kins were indeed a rarity and thus extremely valuable, she was soon stopped by her father, and was returned home, forbidden from ever entering "The Surface" ever again.

100 years later and into the modern times, Princess Alice, was soon given permission to venture off into the land of man again, but on the condition that her older brother watches over her, and that she works to try to bring value to the 7th Hell. While she's living amongst the land of man, with her older brother, Dmitri Alucard, her best friend Yuki-Onna volunteers to handle the 7th Hell, but she does occasionally comes to visit when she's not busy.

The 7th Hell may not be in the best of shape now, but it appears that the more people fall in love with Princess Alice C. Alucard, the more value the 7th Hell obtains. With this in mind, Alice hopes to become an idol and be adored by millions in order to conquer the world by making it her own realm, which she hopes to call "CrimsonWonderland". If she achieves this, then the 7th Hell will be the most powerful and most valuable hell in Albelheim, and she would never have to live back home again, as it would be too much of a risk for them.

She is disliked by a majority of demons in Albelheim, as she is one of the weakest of the princesses and her demon blood is not quite as potent as theirs, and the fact that "The Red Man" chose her despite this, makes them seethe, but if she is successful in bringing in more blood moonshards, and continues to increase the value of the 7th Hell, they will have no choice but to give her the respect she would rightfully deserve. Then finally, after everything is set, she will condemn "The Church" and run them out of her new realm, CrimsonWonderland.

However... not everything is quite that easy and complications are quite certain. What sort of obstacles will she face in her quest for recognition, revenge, and a place to call her home?

Dislikes: Boredom, being ordered around, carrots (unless steamed), veggies in general, attention seekers, clout chasers, rules, and puritanical warriors(those that are or like The Church).