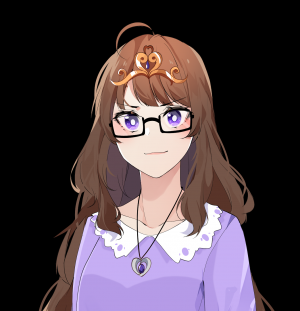 Elica is an English-speaking Twitch VStreamer who is known for her adorable noises, and ultimate mastery of all games. The self-proclaimed "Princess of Princesses", Elica Morganite, primarily enjoys streaming bullet hell games such as: the Touhou series, Rabi-Ribi and Noisz, but is also known to regularly play Mahjong Soul and Final Fantasy XIV.

Elica is the crown princess of the Morganite princessdom, a princess commune rather than a monarchy, whose civilization is based around princess magic. These princesses live in the habitable zone of the planet Alpha Centauri, hidden from all through the use of powerful magic.

The crown princess herself is well-versed in the use of magic, though the tiara she wears acts as a focal point to enhance her abilities.

Elica is also somewhat of a genius, having produced a way to connect to Earth's internet, using a series of tin cans on strings.