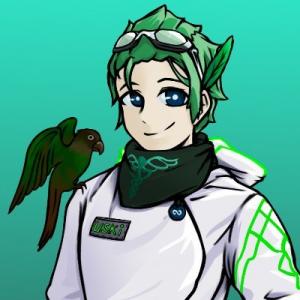 Uski is a Virtual Streamer who makes content in English. Plays all sorts of games from first person shooters to role playing games. Has been playing games since "out of the womb" and claims to be a gifted gamer. Has a passion for music of all kinds and finds Asian cultures deeply interesting. A University student and experienced Fencer. Avatar is inspired by his pet bird Jasper.

Originally, Uski's design was supposed to portray a Cyberpunk aesthetic but overtime through reiterations between the Artist Ermaker and Uski, the final reference was agreed on as the best. Inspired by a Winter coat design and combo between causal and sportswear, the final outfit captures a youthful feel. The Caduceus bandana was meant to reflect Uski's willingness to help others and play healing roles in team based games. Quite similarly, the blue Celtic double-spiral symbol for the zipper was inspired by cultural heritage. The double spiral represents balance between two opposing forces. It also symbolizes spiritual awakening, and the coexistence between the physical world and the spiritual realm. Birth and death, along with creation and destruction going hand-in-hand.

The parrot seen is Uski's real-life bird named Jasper and his aesthetic is partly inspired by his love for him as well. While the other attire is based off of Uski's interest in Snowboarding and exploration. The symbols on his left sleeve are actually a Bow and Arrow design. This was intended to capture Uski's hunting personality and his Archery skills in the real world along with his love for nature.