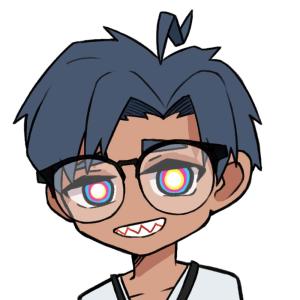 NICO is a male VTuber who casually streams digital art and gaming on Twitch. Depending on the content of the current livestream, he summons a few accessories (such as a gaming controller or a drawing tablet) that float alongside him.

He takes on the appearance of a ghostly apparition without any arms or legs. And he is usually accompanied by “Ghosty,” a small pet that floats over his left shoulder.

NICO is the manager of the small livestreaming group called the Printer Sisters: overseeing their online operations and creative endeavors. The colour of his eyes reflects his love for the group and his desire to maintain their happiness.

The Printer Sisters group is under the umbrella of a single account called Nicosarea (or Nico’s Area)! As such, they take turns as hosts on Twitch; with each one of them bringing something unique to the table whenever they livestream.

Whenever Nico livestreams as Magenta, he does his best to maintain an alternate/separate personality that is unique to Magenta (or the other members in general). He also uses a live voice changer to enhance this illusion. Although it wasn't initially planned, Magenta became an ASMR VTuber since whispering was the easiest way to translate his voice to sound more feminine. If the need arises, Nico can easily switch the hosts to fit the current vibes of the stream.