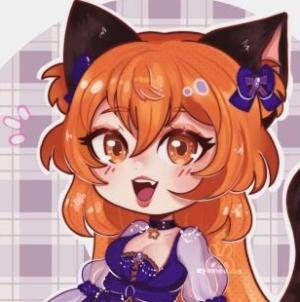 Kitty Gemma is Cute/Fluffy Kitty Vtuber that wants to be loved/accepted. She streams at least 4 times a week on her Twitch and uploads shorts on her YouTube channel almost every day.

Kitty Gemma is a 25 year old fluffy/cute kitty who wants to feel loved and accepted. Since at a young age, she has an interest in space and would want to go to space or to work with NASA in any shape of form to help out with living in a different planet.

Her original home is called "fluffy kitty land". Fluffy Kitty Land is just above earth, right next to heaven as a place for cat people and cats live together. At the age of 16, Kitty decided to live with humans to discover what live on earth is like. After gradating from school, she had enough money saved up to pack her bags and just her rocket to successfully land on Earth. Her chosen place to live in was England and was able to settle in very quickly in her new home. When going outdoors, she normally hides her cat ears with a hat and her tail underneath her dress. Luckily, most humans will think that she just likes fancy dresses and does not think her of some catgirl or possible a "alien". For the past 7+ years, she was able to get a job, purchase essentials and even find love. As a side effect of going into a new environment [or even a new planet], there was a side effect. Kitty's stomach became very sensitive ever since she moved to Earth. Some food just did not sit with her and caused pain, discomfort and even causing trips to the hospital. Despite having this, she does not wish to go back home as they enjoys discovering Earth and the many things that humans do. Since having a sensitive stomach, she now uses the money that she saved up for to go to different doctors around England to find a way to control her digestive condition/illness.