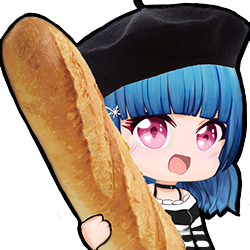 Dream is a virtual content creator that likes playing rpgs and gacha on her stream. She is a fast-learner and has taught herself how to make LIVE2D avatars and rigging.

Dreamy used to live in another world before journeying to earth on her quest. During her time there, she oversaw a village in the mountains where a powerful lake flowed across. Due to her linage of powerful sorcerers she was able to construct her house by the top of the river as it runs down the mountain and provided services to the village by mass-producing potions, she has a good relationship with the villagers and was loved by all. Dreamy is renowned for her infinite skills and abilities. Her powers continued to grow every single day and no one could compare to her magic. Every witch and sorcerer wanted to be like her however she doesn't take apprentices since the last 4 have betrayed her by using their new abilities for nefarious deeds. Dreamy also owns a magical winged pure white cat with different eye color that she raised herself after finding him in a dark dangerous forest. His name is Coconut. The cute fella isn't visible to anyone but dreamy as she keeps a protection spell on him at all times so that people wouldn't find him. His species has been hunted for years to sell their skin and blood that contained a large amount of mana.

One day, the king of the realm wanted to dominate the world and threatened Dreamy to destroy what she holds dear if she didn't serve him and aid him to achieve that goal. However, she refused to help him as she believes that such barbaric acts will only result in terror, bloodshed, and many innocents tears. The king annoyed by her impudence toward him stops all trade and made a new law that those who are close to her will be punished if she doesn't concede. Dreamy's village started harboring ill feelings toward her as they didn't want to lose their lives and precious houses for the sake of one witch. Not wanting to become a weapon for a corrupt nation Dreamy decided to set on a new journey by opening a portal to another dimension where she can start fresh, and find people who truly needed her. She traveled to earth where she now resides and is able to deliver what she always wanted to. A smile for everyone.

You can count on her to make your bad day into a great day in a blink of an eye! So make sure to tune into her stream on twitch.tv/ dreaminspirit.