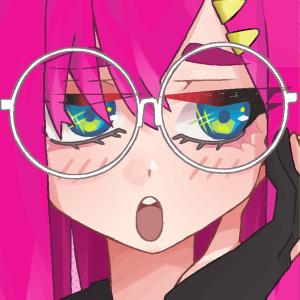 Magenta is a female VTuber who mostly streams digital art and occasional light/casual gaming. As her name suggests, Magenta is based on printer ink.

Whenever she streams, she will be mostly whispering almost 100% of the time (this was an unplanned outcome, which will be explained further under her “Lore”). Although rare, there are instances where she raises her voice from having experienced an exciting or frightful event on stream.

She is also known for her loud water chugging, where viewers can spend their Twitch channel points to request her to “hydrate.”

She is one of the few VTubers who’s character model is portrayed sitting down rather than the conventional standing pose. Fun fact: her chair is the HATTEFJÄLL armless office chair from IKEA, which the streamer actually uses in real life.

Magenta is a group member of the Printer Sisters, a small livestreaming group that consists of her other sisters: namely Cyan, Yellow, and Key—each of them with different personalities and unique voices. Cyan is the youngest of the group; followed by Magenta, Yellow, then Key (the eldest).

The Printer Sisters group is under the umbrella of a single account called Nicosarea (or Nico’s Area): whose online operations and creative endeavors are overseed by NICO, their ghostly VTuber manager! As such, they take turns as hosts on Twitch; with each one of them bringing something unique to the table whenever they livestream.

Whenever Nico livestreams as Magenta, he does his best to maintain an alternate/separate personality that is unique to Magenta (or the other members in general). He also uses a live voice changer to enhance this illusion. Although it wasn't initially planned, Magenta became an ASMR VTuber since whispering was the easiest way to translate his voice to sound more feminine. If the need arises, Nico can easily switch the hosts to fit the current vibes of the stream.