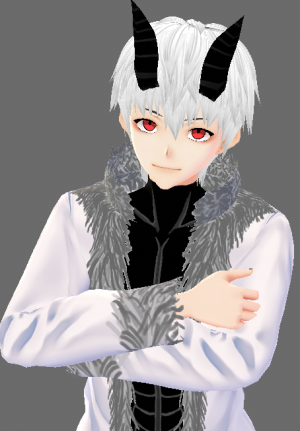 Haise is a male demon Virtual YouTuber. He makes English and sometime Chinese content. Haise plays a variety of games. For now Haise is just a solo streamer cause he is too shy to play with others

Haise was once a human, he went through a lot of hardships, depressions and pain that someone in him awakened. Thats right! Another soul in him and that soul belong to the son of the demon king. The reason of why the demon prince soul is in Haises body was because the prince used the wrong magic chant in the demon school and accidentally fuse himself to Haises body on the human realm from the demon realm, now they are two soul in a body, that makes him have a split personality and also a half human and demon but since the magic chant used up a lot of the prince magic power he ended up falling into slumber but the accumulation of the despair Haise felt woke the prince up and the kindness Haise have never fades and always shines strong so the demon prince cant take over his body. Even though he is a kind guy but also a weeb , after he learn who was inside him, he made up his mind and have a golden dream to be a new demon king of kindness and so the demon prince also took interest on his golden dream and decided to give up taking over and support his brand new partner to be the new demon king. Well but Haise realise he need training and learn magic to achieve the dream, its gonna take a long time, so instead he became a demon vtuber and on the realisation of there is a lot different multiverse of the demon realm he decided to be friends with even more cool demons and learn new knowledge from them.