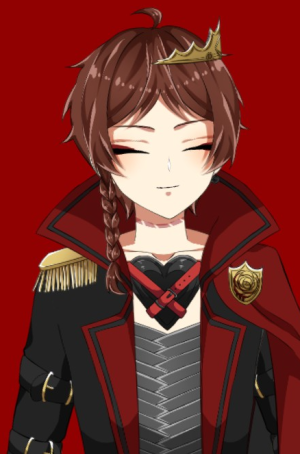 "Soren of Hearts" is the "King of Hearts" Vtuber for the group "AlteraVita and a varity streamer/content creator, with content ranging from full YouTube videos to TikToks and Streams on several platforms.

He mostly focuses on games with a focus on narrative and is well known for being a big fan of "Kingdom Hearts", "Final Fantasy", "Nier", and "Dark Souls" as well as Metroidvania games Such as "Ender Lilies" and "Hollow Knight", even having made videos for Ender Lilies.

Soren is also known for being very proficent at cooking and often talking about cooking on stream with plans to do cooking streams in the future.

Soren is known for his love of Cats and all animals, as well as posting photos of his cat Autumn.

Soren of Heart's is the "King of Hearts", if that can even be his title anymore. The Kingdom in which he hails from is now but ruins overflowing with dark, sealed off from the rest of the world of AlteraVita. Alas a new chapter begins in this story, one which you are needed for.