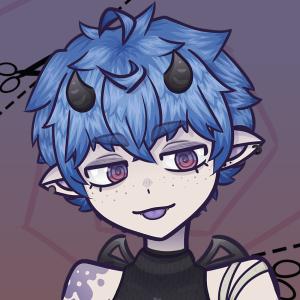 Snippet is a genderless scissor pixie who plays a lot of RPGs and sometimes streams art and Live2D. They make content in English.

Snippet is a scissor pixie who came to the human world after causing too much trouble back home. They cut a rift between the human and fae realms and stepped through into a garbage dump, where they now live. They love collecting cool trinkets and junk they find in the trash (not that they know it's really garbage...).

In the fae realm, fairies, imps, nymphs, pixies, etc. all have their own patron or theme which influences their abilities and their appearance. Most have cute or harmless themes such as honey, ink, or playing cards, but there are a few, like Snippet, who tend to be a bit more... destructive. This caused Snippet to become a bit of an outcast among the others who weren't fond of their things being cut up into scraps.

Snippet has the ability to cut anything, including physical objects/materials and things such as time or reality. Snippet has two forms, their normal form, which they tend to be in most of the time, and their chaos form, with black eyes and cut-like markings all over their body.

Snippet really wants to be able to be themself, without being told what to do or how to behave (though this may cause some... chaotic situations). Though they might not admit it and they'll say they don't need anyone else, deep down Snippet really just wants friends and to be loved and accepted by others, whether they be humans, pixies, or anything in between.