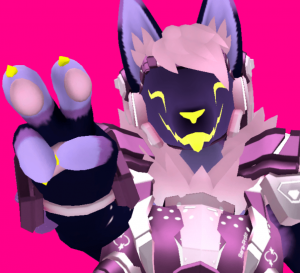 Sera Proto is a Protogen who stands at 5'11" or 181cm. Weight is unknown and age is in her words "30 years since activation".

She has all the standard traits of her species with a visor functioning as a face, armor, and augments. Sera unlike most of her species is a little more on the chubby side. Her fur is dark blue with a faint blue chest leading down to her inner thighs and large tufts of pink hair and dark purple patches of fur on her elbows, knees, and on the base of her long tail. She also has white star like speckles strewn about her body and fur. Underneath her visor she has a reptilian like appearance but covered in thick fur.

Sera Proto is a Protogen, a space faring species created for specific jobs and environments that their creators for some reason or another cannot or won't do. Depending on the job they may or may not have free will or sentience, in Sera's case it appears she has free will outside of her directive to collect as much human knowledge as possible.

Sera Proto, we assume Proto is short for Protogen. She says that's a coincidence. She is fine with Sera or Proto. Proto may be a callsign.

By far the most distinctive trait of her people. The visor is made with nanites which are smaller than we can see but when clustered and interlaced creates a sort of hardened light. When asked whether she could keep her visor open she said "It easily opens or dissipates revealing my true face but I only use it for biological functions. I could leave it open, but I think I prefer it closed."

The visor is black with a light blue filter over it and features a yellow face that changes shape based on expression and speech.

The armor might not be necessary and she says she can remove it and has worn human clothing before. Her armor made of metal and is purple with white graphics displaying dots, her name and designation, and two swirling stars reminiscent of the Dizzy Emoji. She isn't designed for battle so this armor must be standard. The armor isn't just on her chest, it covers her shoulders, upper thighs, and wrists.

Sera claims to be 30 years old and born May 2, but her species are raised in tubes and their consciousness is activated after machine integration. Until that time the body is effectively a shell. If Protogen are woken before the body accepts the machines, it could lead to rejection and severe damage or death.

The doctor diagnosed her with a few things that didn't seem average for her species. For one, her talkatively. She has ADHD, mix type, we don't know if it's intentional but a data collection unit that is chatty and constantly curious with random bouts of obsession seems like a good trait. She also has an overactive immune system which gives her joint trouble.

Earth is the most likely point of origin. She doesn't have any knowledge of where she was held pre-activation. One day she woke up and she was here. She has quite a bit of knowledge about her people and us despite never meeting either us before activation or her creator.

Sera seems to be just like us, quirks aside. She isn't a threat to the planet, although her built in obsession with human media seems odd. The best guess we have to her purpose is that she is studying us so that her people can decide whether they want to include us in their society. But even that isn't a good guess, she laughed when she heard me saying it into the recorder.