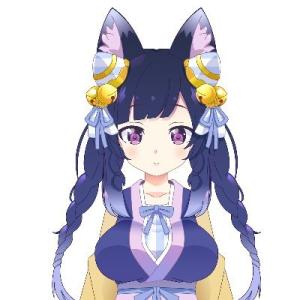 Kazane is a physically handicapped, left-handed who doesn't let her inabilities to walk or use her right hand stop her from her dreams. She understands and speaks English, Japanese and Chinese. She is also a Transgender Woman. Kazane's main content includes MMDs, audio podcasts, and video game streams.

Kazane is the Goddess and defender of the moon. Originally from the planet Lucernia far, far away, she was born unable to walk and, as a boy. As she grew older, the truth began to show that she was always true to herself and awakened her true identity as a beautiful female-tailed fox deity. Kazane hides her tails because even letting one of her thousand tails out would radiate so much power that it would destroy a planet like Earth. Although Kazane cannot walk through normal means, she uses a combination of her ninjutsu and qinggong abilities to form particles called photons below her feet to walk, run, jump, etc. Hence, many call her Kazane 風子, Japanese, for “wind child.” Kazane is very skilled in the use of traditional Chinese and Japanese swords and spears because she is from the Royal Region of Aohana, Lucernia, a big village with Chinese and Japanese influences famous for shrines, dancing, flower sake, kimono and qipao crafting, swordsmithing, and sword/martial arts. Despite this, she maintains a very calm and motherly nature. Her personality earned Kazane the title of Queen of Lucernia, always putting peace and diplomacy before war and conflict in Lucernian-Earthling relations. Her experience with Earthlings who visited Lucernia inspired her to travel across space and time, and she happily traveled the stars and different planets of many galaxies. However, Kazane made a rare miscalculation when she wanted to visit Earth and crashed into the moon instead. She was so tired that she decided to take a break and build a home there. When she was ready, Kazane flew across Earth's sky. She left a trail of stars and celestial energy as she passed, appearing as a shooting star to those that noticed. The sparkle of the water and the reflection of the moonlight caught her attention after visiting a Japanese garden, which made Kazane reminisce of her home on Lucernia. She traveled to California, meeting Riku and telling him that Earth was beautiful and that she wanted to spread her happiness and hope to the world. Kazane eventually settled in Michigan.