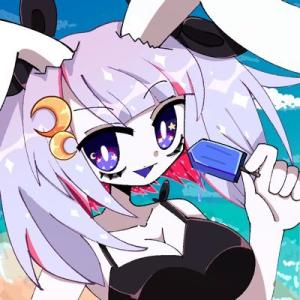 Reinii Rabbit is a female English Virtual YouTuber. She debuted on March 25, 2022. Reinii's model was designed and rigged by funamusea.

Reinii used to be a spirit that guarded the moon. She noticed planet Earth and its population of humans. Desiring to be one herself, Reinii approached her sun mom Sunny about becoming one. Sunny repeatedly told her no until one day - thousands of years later - she finally agreed. She birthed Reinii as a human, and in turn, Reinii lost all of her memories of when she was a spirit for fear of her "knowing too much." Reinii now spends most of her time on Earth, but she returns to the moon to fulfill her responsibilities there. She loves Earth and is fascinated by humans. However, even as a human, Reinii suddenly began sprouting rabbit ears. She also noticed her natural akin to rabbits. This is apparently due to when having been a spirit she was said to have looked like a rabbit. The spirits of all the moon's in the solar system look like different animals. Sunny could not get rid of Reinni's ears and tail. Most of her magic was also stripped from her when she became human. The only reason she can travel to the moon is thanks to Sunny. She is only able to travel between her home on the moon and Earth. If Reinii works dilligently at her "moon duties," she may be able to get a break to travel more.

Reinii does not have pet rabbits, but she does have the ability to command them, sharing a natural affinity with them. Rabid rabbits are not at her disposal as they are "too far gone." Her companion rabbit Drizzle is debated to be sentient, Reinii saying he has a deep voice.