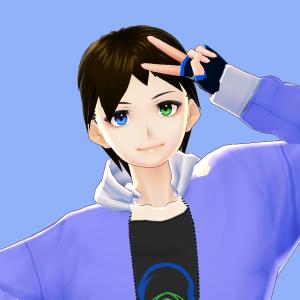 Pix is an interdimensional traveler disguised as a vtuber. Pix mostly streams FPS games. He also is an amateur 3D artist. Most of Pix's assets are self made. He often experiments with vtubing tech, like face tracking or vr tracking. Pix speaks English and native Dutch.

Our universes were once very similar, until the multiverse was discovered in mine. Interdimensional travel greatly changed our way of life. However, my dimension started changing along. Creatures with enhanced body parts were born, and soon, everyone had special powers. After a while, we started calling ourselves “the Touched”. My Touched part is my left eye. I can do fun stuff like change its color, use it as a flashlight, and see in x-ray. However, my most developed power is the ability to see into other dimensions. That’s why I call it my dimensional eye. It also makes interdimensional travel easier, because I can see where I’m going. One day, I accidentally traveled to your universe, where I met Luca, your universe's version of me. To hide my continued travel to your universe, we decided to have me pretend to be a Vtuber.

Why do I still go to your universe, even though there’s no magic or highly advanced science? That’s exactly why! I’m not used to such worlds! It’s why I love the games from your universe: they’re like seeing other universes I’ve visited through the eyes of people who can’t traverse the multiverse!