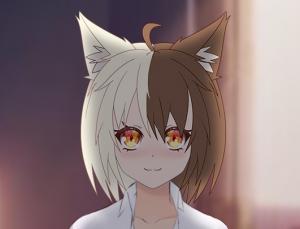 Caramel is a female catgirl that invites people to join her pillow fort for comfortable watch-a-longs on game playthroughs, chatting, drawing and watching meme videos. She's kind of a degenerate so can be prone to making perverted jokes.

Sibling(s): Caramel has 1 younger (adopted) sister, her name is Cerise, a cat with longer hair than Caramel, though also has a two-toned hair color, namely blonde-pink.

Backstory: Caramel was born into an abusive household. Her owner didn’t like that her mother (Cream) had gotten pregnant by a stray catboy, and took this out on her and Cream. She underfed them, locked them up in a small room in her house, beat them with a flyswatter or sprayed them with a water bottle if her mother didn’t do her chores correctly and made them sleep on the hardwood floors. Even though they faced all these hardships, Caramel was loved by Cream. Cream worked exceptionally hard to not only please their owner, but also to take care of a growing Caramel. They both only had rags for clothes, so every night they’d sleep against one another, Cream embracing Caramel to keep her warm. She’d also often forgo her own food just to make sure Caramel was not going hungry. Whenever there was time, she tried to teach Caramel the most basic of things, such as reading and writing. She also played games with her, though there was not much to do in the empty small room where they slept. Roughly four months passed, and Cream had gotten really sick. Despite this, their owner neglected them still, rarely leaving out food for them to eat or water to drink, which didn’t do any favors for her health and she started to deteriorate. Caramel begged whilst sobbing to her owner to get her mother to a veterinarian, but her requests went unheard. A very difficult two weeks later… and Cream didn’t wake up one morning. Caramel cried and screamed, embracing her dead mother. Loud steps outside the room followed by a loud bang as the door swung open, her owner stomping into the room, yelling at Caramel to shut her mouth. Caramel couldn’t stop crying, still embracing her mother’s dead body, even when her owner tried prying her off. That was the biggest beating Caramel ever endured, but to her the physical pain was nothing compared to the loss she felt.

A week had passed, her mother’s body had been taken away by her owner, to where she did not know. Caramel had been forced to take over from her mother in regards to the chores, but due to her never really having done any of them, she did a lot wrong which resulted in more hits from the swatter or sprays from the water bottle, all the while having insults slung at her. Her owner mostly called her gutter trash or disgusting stinking garbage, as her owner hated strays and her father was one. One night she decided it was enough, and snuck out of the house. She felt that nothing could be worse than living with her owner, even living on the streets would be a better life, however short hers may be. As she wandered around the town, she found a bench in a park and curled up on top of it. It was a luke-warm night, so luckily she didn’t feel too cold. She cried softly as she fell asleep, falling down into a deep slumber.

The following morning as she slowly opened her eyes, she was greeted by the eyes of a stranger. She panicked and started shaking, her tail up in the air, the hairs on it spreading out to signify she was scared. As she was hastily looking around for the quickest escape route, the stranger, a man, calmly told her that he wasn’t there to hurt her. Caramel snapped her head towards the man and looked into his eyes. There was something very calming about his voice and his eyes had a very gentle look to them. The man kept telling her he wasn’t there to hurt her, that he just wanted to see if she was okay, slowly inching closer and closer. When he was within reach he gently held his hand forward with an open palm, not yet touching Caramel, just to show her that he meant no harm. Caramel sniffed his hand, smelling a pleasant scent she had never smelled before. The man calmly sat down next to her, taking his time with every movement. A loud rumbling was suddenly heard, Caramel’s stomach was growling. The man reached into his pocket and pulled out a small cake shaped like a fish. “Here”, he said, “have some Taiyaki”. Caramel was apprehensive at first but smelling the cake she snatched it out of his open palm and started scrunching it up. The man sat next to her in silence as she ate the Taiyaki. Once she was finished, he told her his name, Miho, and asked her for her name. Caramel hesitated, but Miho had been so kind to her so far that she stuttered out her own name. Miho also asked if she had a home, to which she rapidly shook her head. “I’m glad I found you on my way to work,” he said, “cat girls aren’t allowed to be outside without their owner if they do not have a bell, and it could be a lot of trouble for you if a police officer had found you.”

Outline for next part, needs to be expanded

Miho, a veterinarian, takes Caramel with him to help her get back to full strength. Brings her to a trusted shelter.

There Caramel meets Cerise and after befriending her, eventually they become inseparable. They are chosen by the Kaiteki family to be adopted into their family.