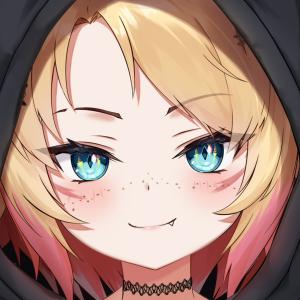 obkatiekat (Kat) is a female Wereneko Virtual Streamer who makes content in English and is from Liverpool in the UK.

Kat is very friendly & welcoming to all, is unapologetically loving, and brutally honest. Often known for her degen and excited “gremlin” behaviour which in turn means also her more gravelly voice.

Her community are called the “Goons”, and her channel is often referred to as “The Motherland” or “The Degen Zone”.

She likes to support people and will often send her community to “Spread Love Like Cheeks” to other creators to put a smile on their face. Her birthday is 9th September. Her height is 159 cm (5’2.5″). Her zodiac sign is Virgo.

Kat will often do Just Chatting streams and will collab with her friends and "wives" like Elly, Sugo, Synnie & more as well as gaming doing a variety of categories like Horror, FPS, Story, Platformers, but tends to avoid PvP. She also started off doing IRL streams, and sometimes switches between Katie (IRL) and Kat (VTube).

This is a story about a girl. A girl like any other, but yet so very different.

She opened her eyes, her young blue eyes, the Sun’s rays on her cheek radiating through a gap in the curtains. Her hand reached up and brushed her hair away from her face, each strand soft between her small fingers. Stretching her limbs out and yawning, then smiling, another day had begun. Her ears pricked up, hearing a familiar sound. Mother's voice.

Her smile faded as the voice set in, Mother was calling. Calling her, yet calling something that wasn't her. She could never understand why she called her that.

A wet feeling down the side of her face, she reached to her face, her fingers this time not removing misplaced hair, but removing the tear that was rolling down her cheek. Another day had begun.

Day in, day out, being called something that sounded like it was shrouded in fog, a stranger to her. Muffled. Distant. Everyone she had ever met, calling her that wretched name.

She had experienced trauma and misfortune in her younger days, but this one was like a bad smell, one that lingered and never went away. Today was the day she turned 10.

Her teacher had not turned up to school and a stranger stepped into class telling the kids to write their names on their work. She wrote “Kat” on her sheet, and the boy next to her let out a snort. "Something funny?" she asked. In which the young boy replied with a menacing tone, "You’re a lil kitty Kat, that sounds stupid, meow kitty," and proceeded to laugh in her face.

The class laughed too. She didn't. She smiled.

Skip forward a year later, and a serpent reared it's ugly head. Her skin becoming a place of unfamiliarity. Every time she spoke it was not her voice that came out of her. The reflection from any surface staring back at her was something else. That same hand that used to move her hair away from her face in the morning had changed and felt different. She was being swallowed by her body, a body that had grown into a cage. A living, breathing piece of meat you would better call a prison.

Over the course of this year begun to grow hair from all over that became harder to keep at bay & hide. As time passed it would get worse and worse, the changes getting more and more.

Days went by, the feeling of her flesh becoming more of a stranger each day. Looking down she would see someone else's hands, but who's hands were they?

Mother asked the girl to take the laundry to her room and upon putting it away realized there was something different below her.

She looked down at her hands in horror as the hair started to grow and her nails turned into claws.

"WHAT THE FUCK ARE YOU DOING, YOU FREAK?!" her Step Father stood in the doorway, with horror in his eyes. "...I-I wasn’t I just-" She tried to cover herself up. "NO! WE'RE GOING TO GET YOU FIXED!" he roared, storming out. Looking down she looked at her hands below her, unable to contain the tears.

She dug her nails into her furry skin, the blades protruding her now sharp fingers, a brush to which she could paint over the top of this canvas. This body wasn't hers, so she would carve it into her own. Deeper and deeper the claw went until it would bleed a cream-like substance. She looked upon her sculpted limb, the word "ILL" stared back at her and her vision went black.

Many trips to Mother's Doctor, the man that would talk and she would just nod and smile.He wouldn't stop talking.

She wanted him to stop so bad, but he wouldn't.Smile and wave, maybe the smell would stop. It didn't. And the changes got worse, the cage getting more suffocating as time crawled by.

She spent the next 8 years trying to numb the pain as much as possible in any way she could. Anything to just escape from the prison that was her skin, ascending from flesh. Suppressing herself and accepting the world just wanted her to be the mask that she wore to keep them happy.

Then the day came when she moved away.

She spent time embracing her other form, accepting who she was, taking her own steps to balance & deal with everything on her own terms. “I am me, and I will be me unapologetically.”

She moved to a place of freedom to be herself, a fresh start to bloom and blossom, and become the person that she was born to be without society, without people to judge & tell her the rules.

To pursue herself and escape, step by step, back into the Light, giving others a place to belong and be themselves too...