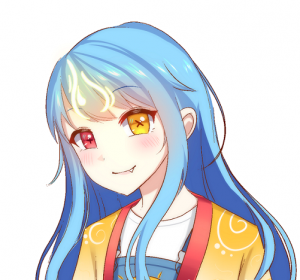 Jessie is a Virtual YouTuber/Twitch Streamer who streams/records in English and makes variety content. Jessie focuses mainly on games and learning art/programming/languages. Jessie is a bit of an airhead and is easily distracted. Being a celestial creature associated with light and darkness, Jessie originally has no physical form, gender or birthday, but chooses to adopt the look of a young human being, albeit with slightly alien characteristics.

Originally, Jessie was nothing but a formless mass floating around in a world far far away. Known simply as "Light", Jessie was a celestial creature passively emitting light energy, showering the world below in rays of sunshine, like a gentle sun.

One day, a crazy portal magician accidentally transported himself to the celestial plane and, having gone completely mad from the experience, began creating portals to other worlds all over the celestial plane. Jessie, caught on the edge of one such portal, was sucked in and sent crashing into the Earth, materializing in physical form upon impact.

A nearby pair of drunken Brits happened to be out walking, and in his drunken stupor, one mistakes the crashing celestial creature on the night sky for his colleague Jessie, exclaiming "Jessie? THAT YOU? WOT ARE YE DOING ON THE SKY LAD?!", to which his drunken partner in crime replies: "Let's go home Mac, yer doin me tits in..."

Having no prior existential self-awareness and nothing to call itself, The creature known previously as "Light" took the name of "Jessie", as it was as good a name as any.