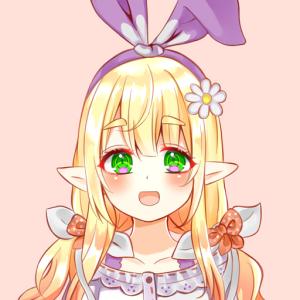 Elfie is an elf independent virtual youtuber believes she could find back her memory through delivering as a content creator.

Hundreds of billions, if not trillions, of the different clocks tickling through space, Magical Heart has reunited different kind of races include Elfie to be exiled into the Human world.

Elfie who is an Elf, cute but an airhead at the same time due to her suffered from memory loss. Despite of being cute, She is very cheerful and enthusiastic. She likes to draw, plays game and sings. But she mostly draws during her leisure time.

She is known as a bunny for an animal spirit. Because she mostly follows the bunny pattern such as the ribbons on her head and theme colors. One importantly, She likes Mango. There was no specific reason but it was the first fruit she ate in the Human world so she felt in love with it.

As the time passed by since pandemic season, Elfie had learned about being Vtuber. Days by days, she decided to deliver as a Vtuber because she believed that the clues might help her to find her memories back.

However, Elfie has a friend named Sora. Who is a Vampire girl, also known as her closed friend that she usually fights along with. Even though they are always fighting, they get along well. In the latter, Sora also joined her as a partner Vtuber.

Usually, Elfie puts on flower on her head because she wants people to recognize her as a pure and innocent elf, even though she is truly chaotic and screams like Rushia especially being with Sora. She is completely different around people. But she is timid and quiet when she collabs with others. She knows where to behave, perhaps not in her stream alone.

Elfie will be going to have Live2D debut soon, between November or December but hopefully, it shall be this year!