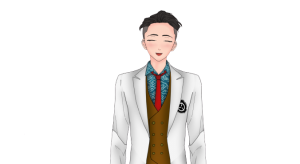 Jacko is a member of the SCP Foundation level [DATA EDITED], who at that time was assigned to be the chief field researcher in the [DATA EDITED] area. Often he is also directly involved in the anomaly research process, for him to work seriously and trust his fellow members and team.

Putting aside his professional nature at work, he has strict and disciplined leadership traits, just a little information that he is sometimes a little careless and lacks focus, because there was a containment breach that made one facility a scene. This happened because previously the O5 Council gave the Task to find the origin of the virtual Anomaly and secure it.

because of this he held an interview with SCP (old Ai) to find out about the virtual anomaly. Jacko’s carelessness was due to fulfilling SCP ‘s wish, namely to connect an internet connection, this resulted in the entire facility system being under SCP ‘s control (OLD AI). luckily this was handled by jacko himself, namely by disconnecting the internet connection at the facility. Since then he has been demoted by the O5 Board to become a Field Researcher but still carries on his duties.

but he didn’t just give up, he submitted a research proposal to SCP-052 (time traveling train) because SCP-052 was immobile and reportedly no longer functioning. Jacko’s purpose in doing this was to check whether scp 052 could be classified as scp or not. .

the o5 board approved his research proposal. and jacko immediately departed accompanied by MTF-9 (SNAKE HAND) and Dr . when they arrived, Dr. jacko and Dr. immediately observed SCP-052 there, it was obvious that scp 052 was no longer functioning (silent) and there was no anomalous effect outside the area of ​​scp-052.

However, when testing the anomalous effect on SCP052, Jacko was pushed into SCP052 by Dr and it turned out that SCP-052 was still alive and moving into inter-dimensional space.

That’s where Jacko disappeared on duty and never came back.