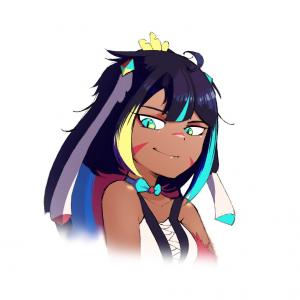 Akayton is a Brazilian VTuber/VStreamer who streams mostly art and games in Portuguese, English and Spanish. Her appearance is composed mainly by red, blue/green, white, yellow, dark blue and brown, fully based on feathered reptiles.

Kisabette Chiur Akayton was born a pure Meruken (alien species) in the reign of Kinoroinezaki, Rakuji dimension. She always had a fragile health, so her time was mostly spent reading books inside her library in the castle. While still young, Akayton accidentally used a spell that turned all of her own reing into a mixture of Merukens and humans, they were now demihumans. Moved by her fear of being judged, Akayton used a interdimentional spell to teleport to Tokyo, but sadly some things went wrong and she's now living in Brazil with her mother and also her father, always wanting to go to Japan to fusion the Earth with Kinoroinezaki, expanding her power through the universe. She slowly became addicted to videogames. While navigating through some TV channels, Akayton met an idol group and noticing their popularity, quickly decided to become this world's best idol. She's now aiming to dominate this world in a pacific way by becoming the most famous idol with the help of her fans from the VTubing community, being Hanamori Walker her worst enemy and the one to defeat.