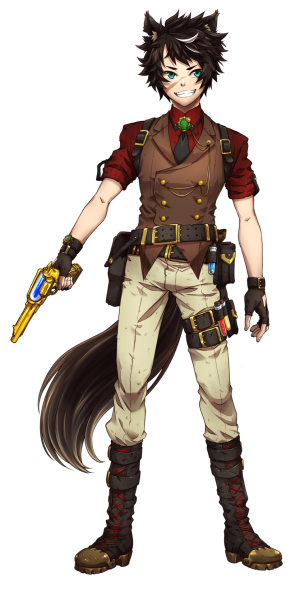 Ken'ichi Rei is a VSinger and VTuber living in Germany who describes himself as "adventurer, inventor, alchemist and traveler between worlds with that little pinch of canis lupus". His main focus are music/karaoke streams, but he's also a gaming, VR and variety streamer. Besides streaming, he uploads song covers and produces BGM track for himself and for other VTubers.

Ken'ichi Rei is a traveler from another world who got his iconic wolf ears and wolf tail by accident, because using portals to other worlds, which are activated by the green gemstone he wears on his collar, are dangerous ways of transportation. His father mysteriously disappeared and left only the gemstone and some cryptic instructions on how to use its powers to create portals. As soon as Ken'ichi found a way to channel the stone's powers, he embarked on a journey to find his father and, eventually, return to his homeworld. For now, though, he resides in our world, because he believes that the stories and music of our world might give him insight in which direction he should be heading.