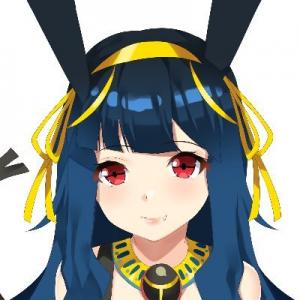 Asyla is a VStreamer that primarily streams on Twitch. She's a magical girl villainess exhibiting features of the set animal, a dog-like creature from Ancient Egyptian mythology.

Asyla is a villainess bestowed powers by the god Sutekh. The catalyst for her powers is a "Was Sceptre". She decided to become a streamer with the hope that having magic powers would give her an edge in the industry, but realized too late that the market had already been flooded with other magical girls, demons, etc.