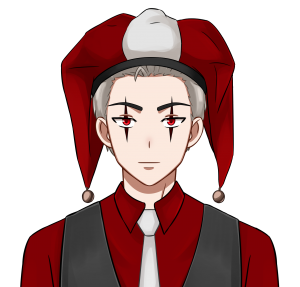 Vance is an English speaking Jester Vtuber. He enjoys learning about history and playing rpg, strategy and story based games. He occasionally plays FPS games as well, though he is not very good at them. Rarely is Vance seen streaming alone since his mischievous side really shines when he is with others.

Vance von Feste, was a poor jester from the 15th Century, who could never become a famous jester was executed via flaying alive on Feb 13th 1594 He was born in a low noble family called the "von Feste" on May 27th 1572 Somehow brought back to life in early 2021 looking as young as the day he died with the only difference being his skin having been stitched back onto his body. Although it is unknown to Vance as to how he was brought back he decided to use this as a second chance to use his skills in trickery and mischief on whomever he pleases having not learned from his previous mistakes which lead to his execution. Seeing that the role of jester wasn't a viable way of earning a living in this day and age and didn't want to be reduced to just a "clown", so he decided to start streaming on twitch while still hoping to achieve his dream of being a famous jester by spreading joy and mischief.