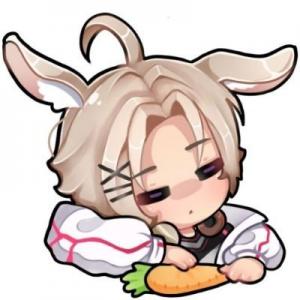 Ren Leveret is a wild rabbit that adores his hobbies within his natural habitat. Video games being primarily his favorite to kill time on whenever the opportunity arises. One way of expressing himself at ease is by venturing off into the streaming world; filled with limitless amount of interactions and connections, which Ren himself is most enthralled by. Where will his streaming ventures take him?

Ren Leveret was born in a world where anthropomorphic creatures coexist alongside humans, he never pesters much details on his origins only acceptance of the identity he lives by. Languages that you often see him speak is either English or a bit of Vietnamese. He currently resides in a distant country where maple syrup is considered a common tradition, it’s definitely not Canada whatsoever.

His incentive in becoming a streamer stems from his aspirations alone: Improving upon self-esteem, communication skills and forming memorable bonds that he wasn’t able to accomplish during his younger days.

If there was one thing he wished for in life the most, it's being able to live a fulfilling life without regrets; and to know the hearts he’s touched has influenced them to be better people than they were yesterday.

Where will his streaming ventures take him?