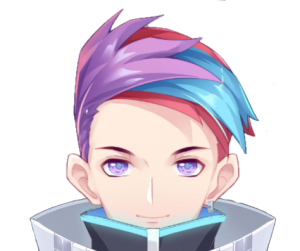 Seuh (pronounced Say-Uh) is a variety streamer from the UK. He is currently an independent VTuber. As a former coach and competitive FPS player, he has a regular schedule of FPS games but also plays random games in his back catalogue of over 300.

Every now and then he will host an advice segment and upload the content on YouTube. Seuh also hosts a Talk show once a month that involves traditional streamers, as well as VTubers.

Seuh is from Earth-333. In his universe, the global government recently banned video games due to widespread addiction. In his universe he was a celebrity and he used his fame and money to purchase a multi dimension transporter from a shady collective of people. Seuh ended up here in this current universe where gaming is at the forefront! Unfortunately he is stuck stuck here but in losing everything, he is turning over a new leaf and using his skills to stream games, host talk show panels and give you life tips!