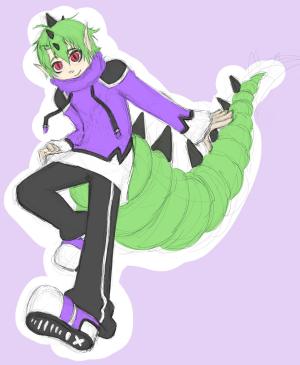 Touma is a Kaiju VTuber who generally wants to enjoy his Audience. For this he plays many Games and tries to find things the people like. He is still a Pre Debut VTuber but already made some Streams and Collaboration to test out his Equipment. The Debut Date isnt decided yet and the Page will be updated when something new will be announced.

Touma was Born 300 years ago and comes from an deserted Island in the Pacific where he grew up as a Large Monster for 200 years. After getting fond with Humans and deciding not to destroy their Lands anymore he deciding on getting a Humanoid Form which he can freely change back and forth into his Kaju Form. To get a better understanding of Humans, Touma decided to move to the Human Lands, where he found out about VTubing. It sounded so interesting that he decided to Start a Career as VTuber, where he now plans his very own Debut Stream, hoping People will enjoy his content and getting happy through his positivity and enthusiasm.