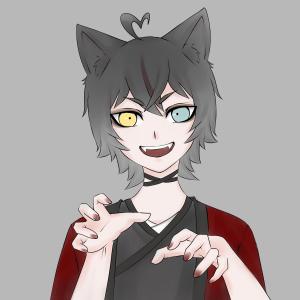 Tamaki is an English Kitsune VTuber. He loves to play and hang with friends.

Tamaki went to sleep like normal in his bed. He was in his bedroom his day was wonderful so he hoped for sweet dreams. But this night was different. He felt like his dreamy was feeling more "Real" then it should be. He turned from a Human to something else. He had big ears and a big tail. He was confused didnt know where he was. But then it came back to him. "I'm still sleeping" he said. But that was not the case he tried hurt himself to wake up but nothing worked. The World the DREAM WORLD was beautiful and after some time he stopped feeling the need to wake up. "This might not be so bad" he thought.

Well he had everything there. Food , Internet , a Computer , a House as big as he wants it to be.

The moment he felt satisfied he woke up. In his bedroom thinking "This was a dream after all". He didnt realise then at this moment

He still had his Fox Ears and his tail. But they were not rly there. More like a shadow. The Next day no one saw it but him.

And since then he started to sleep more and more often just to enter his Dream World. After some time he was bored and looked for smth new. He sat down in his Dream House , on his computer and opened as Site called Twitch.

Shown was a purple haired boy playing Video Games to an audience of many many ppl. His name "shxtou" Tamaki watched him for days , weeks and decided i want to do that to. He had so many friends , ppl that talked to him.

Tamaki now spends most of his day in his Dream World streaming for you to see him... Come Over ! He can make your dreams come true.