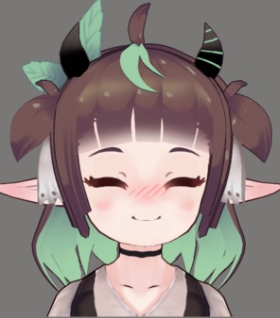 PokeShidori is a Virtual Twitch Streamer who makes content in mute. Shidori is a variety streamer that mostly plays RPG, MMO games and on occasion streams casual games. Shidori's zodiac sign is Aquarius. PokeShidori is a huge fan of Pokémon, Star Wars, Lord of the Rings. PokeShidori has a Pokémon YouTube where they creates Pokémon content

PokeShidori speaks an ancient language known as the chipmunk but only very few has the gift to understand this ancient and rare language if you have that power to understand then rejoice as your one of the few chosen ones.

Shidori is an devil imp that's been locked in there room by angels for being annoying and smol. Shidori has a foul mouth and likes to stab anything that moves — Shidori is constantly getting there self into trouble. Fucking up the world by opening portals that lead to hell. Shidori is the daughter of the first Demon KING. Not much is known about Shidori's father but many stories tell of the first DEMON KING as ruthless and way more powerful then lucifer the first angle to have fallen to hell.

PokeShidori is a Mid-rank demon that give off a wicked aura. Shidori has a childish appearance with tan skin and green eyes with blue sclera. Shidori was born bearing clear malice towards humans during the age of the former demon king when most monsters were born to kill humans because of instinct and hunger. Shidori once fed on human fear, screams, and expressions twisted in agony, but now that Shidori has become a sweet devil imp in the present, they have come to prefer human expressions slackened in pleasure and ecstasy, and cries of delight. Shidori love depravity and chaos and detest purity and order -

According to humans radical ideology, Shidori is far worst then any evil in this world and may be more powerful then the first DEMON KING, Shidori is known to turn humans into monsters just for the fuck of it, once your turned the effects of the spell can't be undone!. When Shidori spots a woman, Shidori has the power to turn her into a succubus -

Demigods such as Aeacus (son of Zeus) Aeneas (son of Aphrodite) Belus (son of Poseidon) Has such hatred for Shidori not only for destroying Mount Olympus and killing there parents but erasing the Greek region from existence as a whole.

Norse Gods such as Odin, Frigg, Thor, Loki, Balder Also fear Shidori not because what happen to the Greek gods and Mount Olympus but because Shidori really killed Odin.. king of the gods and has stolen Gungnir, AKA “The Spear of Heaven,” Thor God of Thunder hunted Shidori down but was killed eventually by Shidori.

In hell Shidori is known as "THE ONE TO BRING ABOUT AN END" it means to the demons if there is creation there will be an end, if it exists it will be forgotten.

Shidori has SIN and is a threat to the universe so God in Christianity the created of all has forbid Shidori from ever speaking again so now Shidori is (MUTE) no longer have the will to speak ever again. Shidori is locked away in heaven and sealed by God's angels considered the seven archangels: Michael, Raphael, Gabriel, Uriel, Saraqael, Raguel, and Remiel however that may have made things better or for worst only time will tell.

Many tell of the return of Shidori's mother coming to heaven to free her child Shidori from the chains of God and some think Shidori's mother is ironmouse a Demon that looks a lot like Shidori but only time will tell.

in the depths of hell Shidori army is forming and is not happy about Shidori's capture so Shidori's top general of the grand demon Army "Dawn of Confusion" is planning on rescuing Shidori and attacking heaven.

THE FIRST DEMON KING HAS HEARD THE NEWS AND IS ON THE MOVE!!!