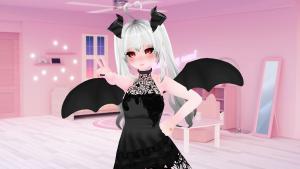 Ally Rueke is a female English VTuber/VStreamer. Her avatar is a succubus with twin white pigtails featuring demon horns on top and black wings sprouting from her back. Her pronouns are she/they and she identifies with the LGBTQIA+ community. Ally's community centers around a safe space for all who are ages 18 and over. She debuted on 3/21/22 and her primary platforms are Twitch and Twitter.

Ally Rueke hails from the Underworld. Born to a family of powerful succubi, she strives to live up to her family's expectations and has set off to Earth to steal the hearts of mortals. While in the Mortal realm, Ally discovered many different foreign activities such as video gaming, anime, and streaming. Hesitant at first, she eventually decided to start streaming. In the beginning, it was a ploy to attract many mortals and cause them to fall to her influence. Now, however, she's increasingly found herself caring for her viewers and would never use her powers to deceive them. This puts Ally in a bind, though -- will she become the family misfit who has learned to care for mortals, or will she put her emotions aside to become the most powerful succubus ever known?