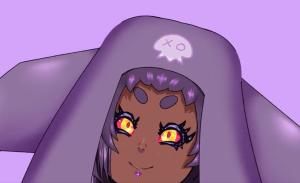 Okami is a kami, or spirit, Virtual Streamer and Youtuber who streams in English. Usually relaxed, she is known to become passionate when playing video games and talking about story elements in video games and anime. She is eccentric, soft-spoken, easily distracted, but blunt and somewhat stubborn, finding herself intensely tackling difficulties in games and illustrations head-on until she comes out victorious. Competitive games bring out her more vibrant side.

She was first summoned on the calendar date of December 19, making her a Sagittarius. Her usual height is 4'9", though she is known to manipulate it at will.

Okami, given the name by those who summon her, is a spirit that has a dedicated shrine within a well-hidden grotto in the USA. A kami, or spirit, of inspiration, creativity, and motivation, she finds herself summoned usually by musicians, artists, and dancers hoping to ascend beyond mediocrity into legend. Due to the nature of her abilities, she finds herself seldom summoned, but happily grants her muse gifts to those that do.

A musician who is learning shamisen seeks out her shrine to inspire creativity. After playing to the best of his ability, she appears from beyond the torii and is told that the musician wants her to stay with him as long as possible so that he can consistently improve, surprised that she appeared at all and immediately influenced his ability to play substantially better. She is uninterested until he mentions that he has games at his home, to which she immediately changes her mind and decides to take him up on his offer.

She discovers a computer, gaming systems, and even an old unused drawing tablet that he has, and decides to preoccupy herself when left to her devices by streaming and posting her art creations online. She takes interest in a multitude of subjects, due to the vastness of the internet, and decides to expand her own knowledge as well.