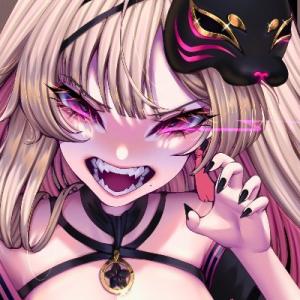 Neena Makurano was a female Virtual YouTuber and formerly a member of Kawaii's 2nd generation alongside Aruru Gray, Namiji Freesia, Shee Icho and Lua Asuka. Neena has a very optimistic and outgoing personality. She loves conversing with her fans, the Bloomins, and will occasionally utter an "un-seiso" word or two just to see how they'll react once they realize what she just said (said impish behavior is why fans have come to appreciate her). She is very competitive when it comes to games, most especially on FPS (first-person shooter) games such as Apex Legends - which she had spent innumerable hours on even before she became a VTuber. She is hardworking in and out of her VTuber career and makes it a point to maintain a positive, fun-seeking outlook in life. Neena frequently visits her Kawaii senpais and genmates, and other VTuber friends whenever they are seen streaming.

Neena's YouTube channel was created on 17 October 2021. Her Twitter account was created in October and she started tweeting right after Kawaii announced her upcoming debut on 31 October. She debuted on 5 November, 2021. On 27 May, production kawaii's Twitter announced that Neena would be graduating from the agency on 2 August 2022. She also held a stream to announce it. However, on 3 June, production kawaii released a statement terminating their contract with Neena with immediate effect due to some breach of contract on her part. Neena retired without a graduation stream, her last stream on her YouTube channel and last tweet about members' gift on 2 June was her early goodbye to her fans. Her channel closed at the end of the same month.

I come from another dimension! My world is full of kitsunes. We come in all shapes and sizes. My true form is a black/pink Kitsune. My curiosity of other worlds led me to travel with my companion Otikuma to Earth and meet humans! I speak my own language, but you won't understand it, so I've learnt English so far and am learning Japanese, so I'll appreciate all help you can give me! I became a VTuber on your world so I can meet humans and become the greatest of friends! YAY! I fell in love with the Japanese culture most, so wearing a kimono was my favorite style. The cherry blossom on my jewelry comes from my home planet, which is why I love Japan so much! It feels like my home away from home!

I lost one of my earrings in my travels, so if you find it, please return it! I miss it. :(