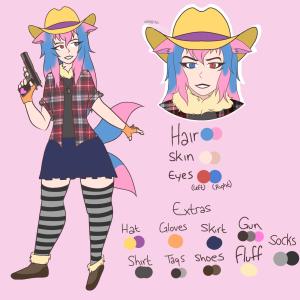 Minxy is a feminine male VTuber and VStreamer, Loudness is basically his middle name, high energy is the game, his voice acting skills are expansive and he plays a bunch of games. He has always wanted to entertain people, thus he set the stage and is ready to show what he's got.

Deep within the Fox Clan owned laboratory a secret project was initiated to go into full production, the ultimate assassin needed to be perfect so a scientist by the name of Dr. Noon set out to different dimensions and timelines to take the DNA and attributes of the most powerful beings, during the production of the project known as "Project: Fox Warrior", the government caught wind of the illegal activities of the Fox Clan, they had been allegedly the most infamous gang in Japan, during the raid on the lab and other Fox Clan owned industries the project was taken into a secret U.S Government facility, originally they had wanted to dismantle him but after seeing the notes and research put into it another scientist, Dr. Tenali, took the project into her own hands, after a few failed prototypes, she had considered giving up but then she read over the notes again and saw small writing stating "Must use a sugar based Bio-Mass as it's basis", she then realized the missing component and reason the previous prototypes failed, Sugar allowed for near boundless energy when combined with the other chemicals and bio-masses, not to mention, allows the nanomachines to become energized to regenerate lost cells and even regenerate limbs and nearly his whole body, thus the perfect basis was found, cotton candy, it was nothing but sugar so it was the perfect basis, and after some tweaks, the project became its pure final version, Minxy, was born, Minxy was immediately sent on a mission and after a great success Minxy went on to become a respected soldier, and after some time became the leader of his faction, ShadowWatch, armed with his M1911, M16, 2 Assault Shotguns, and the custom made Fox Blades he now uses, he brought about justice and peace to the innocent, as time went on he began to have doubts about his origins, and so he went to the files and found out about the Fox Clan, and he then renamed his faction to the Fox Clan, he would reform the name and he did, he now continues his work and his path to world peace.