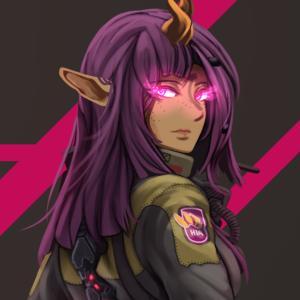 Her songs revolve around the "HKSF Universe", with "Throneless III" serving as her VTuber lore, as well a prequel to the novels, and "Bells of Bakkanal".

Note: She has retired from Twitch as of Q4-2022 due to health reasons & personal interests, but remains active on YouTube. Info: https://minervamariesagan.com/2022/09/12/why-i-must-quit-twitch-for-youtube-and-my-upcoming-debut-novel-and-stream-less-from-now-on-or-literally-die-for-real-caa120922/

She is the High Commander of the Hellion Intelligence Agency (HIA) and therefore each stream is part of the great "Counter-Insurgency (COIN)" Operation against the Kingdom of Heaven; specifically Dante Alighieri's lies about the Hellion Empire's nine provinces being stacked on top of each other, and Angels of Hell having red skin and goat legs.

An Angel of Hell, embedded to train the human rebels of Purgatory against the Kingdom of Heaven. She hides her wings and horns, and utilises their equipment. - "Minervai'El, The Clandestine."

Employed at the Hellion Intelligence Agency (HIA), in the Timeless Realm of the Afterlife where Mother Nature rules ever eternal, High Commander Minerva collects many forms of intelligence for data processing, condensed into easy-to-read reports for the Queen and Vice-Queen of Hell and the Inner Circles and Cabals.

She is a long-native citizen of the Nine United Provinces of the Hellion Empire and resides in the eighth province of Fraud, and is an ex-citizen of Old Heaven.

Officially, she is designated as the High Commander of the Hellion Intelligence Agency (HIA), whose motto is: ”Ad Maiorem Omnium Hominum Libertatem.”

Her resting-state is easily identifiable by her:

Other features include a:

Her current voice is strangely masculine, and rightfully so, to her own disgust, due to the damage sustained to her vocal cords during the Final Battle for the 2nd Generation of Mankind, in which she was throat-punched by the Archangel Raphael himself.

Despite surviving an over-matched duel, Minerva has never recovered ever since, even with the magical treatment from the greatest of healers across Hell and Purgatory; no human technology is currently able to mask her odd voice.

Her true voice and other forms are unknown due to her suspected talent in polymorphism and age. She is also able to hide her horns, elf ears, and wings at will in order to blend into the local human populations she is deployed in.

She is a subsonic flier due to her preference for stealth and therefore is experienced at flying at supersonic speeds or supercruise like many Angels, Heaven, Hell or Purgatory.