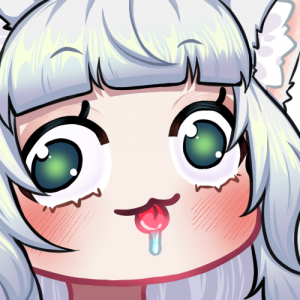 Mifuyu is an ex Shrine Maiden/Miko who's going to school and having fun in the human realm! She's a variety VTuber! She loves to play games, sing and chat~!!

She used to be the small little fox, she was a magic being without knowing it, but after a while she got wounded and the head monk of a temple found her and took care of her. The next day he was wondering what he should call her and called her "美冬" Mi Fuyu - Mifuyu, Beautiful winter.

After living at the temple for a while she was healing and she grew fond to that shrine and the monk and decided to stay.

Over the years her powers grew stronger and she gained the power to shape-shift. She lived a happy life with the monk at the temple taking care of it and it's surroundings day by day. But for kitsune's time passes way faster because they live longer than humans so after years she noticed that the monk was growing weaker and older with time really quickly.. and eventually his time had come, his last wish for her was for her to have a normal and fun life amongst others people and humans not only this one old bum that he was.. but she stayed with him till his end. and after a few years passed she decided to still follow his dream and make her dreams come true too, to make people happy and to help their days She got to go to school and make friends and also started streaming during her time off, and that's how mifuyu came to be!