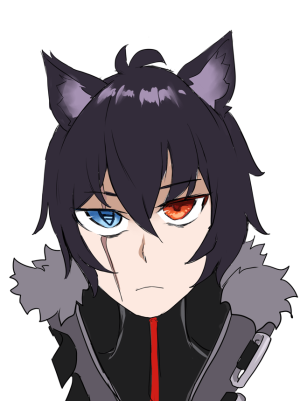 Medicus is a Virtual YouTuber and Streamer who makes content in English and PH.

From fallen prince to Emperor of Fallstar, to simple gunsmith.

Born in the slums of Fallstar, Medicus Fortuna was slated to be just another slum kid. But after a cascading butterfly effect, he was crowned 3rd in line to the Moon-lit Throne of Fallstar. Displeased by the ascendance of a half-breed to royalty status, a midnight coup was performed by Alexia, second to the Throne.

Shot off The Spire of Fallstar by his own gun, Medicus fell, his right arm blown off. Before he hit the ground, he was offered a deal by Veles, the Last of The Great Gods. All he had to do was take back the throne of Fallstar.

He fled Fallstar, escaping on the last ship departing the kingdom. There he met Leeara and The Hardknocks, a group of adventurers.

For four years they spend their days protecting caravans in the kingdom of Pyralis, a harsh desert wasteland, far to the west of The Pantheon. Medicus never heard from Veles during these long years, but he never forgot the deal that was struck.

Medicus's past finally caught up to him. On a contract like any other, the Hardknocks were ambushed. The group bought time for an injured Medicus and Leeara to escape but to no avail. The group was slaughtered, with Medicus being the only survivor. Bounties for his head were everywhere. So he hid.

After some time, he encountered a group of warriors, lost in a strange new world and exiled by Fallstar, much like himself. Thus together they formed 'The Usurpers', a group dedicated to overthrowing the Empress and avenging the victims of her reign.

So they fought and defeated a Fallstarian siege on the kingdom of Omen, losing one of their own in the process. Upon meeting with the Skeleton King Cain, Medicus, with the help of Veles, The Usurpers were given 6 months to prepare, then they would invade Fallstar with the support of Omen.