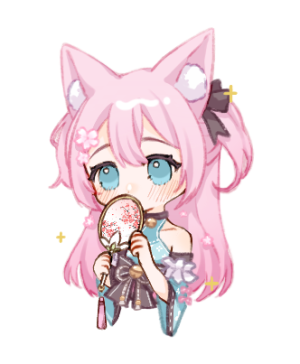 Carmalista is a yokai, the spirit of the cherry blossoms. Every cherry blossom season, it is her duty to check on the trees without being noticed but eventually, she has decided that it is her time to share her teachings for someone to take her place. This gave her the courage to become a VTuber to share it with everyone around the world.

It was finally cherry blossom season in Japan. The trees were as pink as they could ever be, and festivals were roaring. You will see stands that carry foods and drinks that are cherry blossom theme, and hanami is very well known for these festivals.

[Y/N] was with their family at one of these cherry blossom festivals. They weren't there for the food and drinks but instead, they were all part of the hanami. They continued their hanami and followed the path with everyone. However, [Y/N] stopped their tracks and continued looking at this one cherry blossom tree that they couldn't seem to get their eyes off of. [Y/N] family looked at them and said, "We'll be at the cars waiting for you!" then they eventually headed off. [Y/N] started to take their phone out to take photos and, so they did. Each shot was so beautiful and, they thought that the photos they took were enough but, something was compelling them to get closer to the cherry blossom tree. [Y/N] shook their head no and continued their way back on the trail. They were walking for 5 mins and eventually came to the middle of a trail. There were no signs but there were two pathways. [Y/N] was very confused over the two pathways and couldn't even remember which one lead them back on the trail. However, they decided to take a right because the path was filled with so many cherry blossoms.

They were so wrong about the path. However, this path leads [Y/N] in a circle. [Y/N] was not even panicking at all. Instead, [Y/N] was so amazed by the view they were seeing. The trees were so pink and the cherry blossoms were slowly falling from the trees. At first glance, they looked like they were doing a little dance and swirl around [Y/N] until they eventually fell to the ground. [Y/N] continued to walk along the path until the path finally ended. There you could see a field with a giant cherry blossom tree. The tree looked as huge as a 100-year-old willow tree.

Someone was standing in front of the tree. It was a girl with Neko ears and tails wearing a qipao. It looked as if she was whispering to the tree with her palm on it. [Y/N] was more confused over the fact that this girl had ears and a tail. So, they started rubbing their eyes to see if they were hallucinating. [Y/N] could still see this person and they have agreed with themself that they were not hallucinating. This gave them the decision to approach the girl but as they were approaching they stepped on a branch that seemed to scare the girl. Her ears started twitching in alert and she eventually vanished like thin air.

From that day, she was to never been seen again by [Y/N] or so they thought...