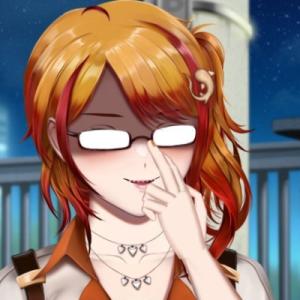 Mako Fukasame is an English female wobblegong shark Vtuber on Twitch who is obsessed with chicken tendies and nuggies. She is mostly known to be the Australian University of New South Wales (UNSW) Computer Science vtuber lecturer.

Her content mostly includes variety gaming especially Dark Souls, Elden Ring and Minecraft; talking about and tinkering with tech such as arduinos and mechanical keyboards; and having partnerships/sponsorships with UNSW's clubs and societies.

She unofficially debuted in the class of COMP1511 (computer science course) on the 10th week of Trimester 2 2021 (about mid-late 2021). She then debuted on twitch on the 10th of September 2021 using the same 2D model as she used in her unoffical debut. Somewhere along the way (around October 2021), she then changed to using a 3D model with long blond hair and red eyes. She made a christmas wreath made out of tendies themed sweater for that model too. On Feb 7th, she made an official redebut showing her new wobblegong shark themed model. In that debut, the date was purposfully set to be on the same day as UNSW's O-week (Orientation week). She had a partnership/sponsorship with UNSW's clubs/society organisers (named ARC) to promote some of UNSW's clubs/society. During the week, events such as society tours, online discord speedfriending, virtual UNSW tours and a virtual escape room from the Puzzle Society were held.

Previously known as the COMP1511 Waifu, Mako Fukasame is the University of New South Wale's first (kinda) vtuber! Even though she is a wobblegong shark, she promises she won't bite (too hard). She'll be popping up during events and hosting community streams from time to time ᕦ(ò_óˇ)ᕤ