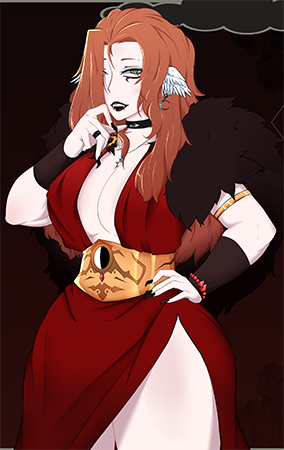 Magnolia is a Virtual Villain Streamer who makes content in English. They play a large variety of games including puzzles, RPGs, single player, multiplayer, and MMORPGs (Specifically Final Fantasy 14). They work hard to bring connections to all in hopes of gaining the power to take over her realm.

Magnolia "Midnight" Moros is a chimera woman, made of many different animals. The wings of a dove, fangs & tongue of a snake, claws of a lynx and the body of a human. Being such an odd combination truly causes her to catch the eye of many in her city of Avalon, where most people look like everyday humans.

The reason for Magnolia's odd appearance is the fact that she is a nightmare with sentience. She spent a large part of her life locked up and studied by Avalon's Nightmare Division. She was released from her imprisonment with after making a deal with the Nightmare Division's Captain, stating that she will work under them and adapt her interesting skill set to assist their agenda. Agreeing to her new form of freedom, Magnolia now works as a member of this division, creating creatures of both nightmarish and dream-defying excellence.

Even under the ever watchful eye of Avalon City's guards and many of the "Dream Eater", a specialized unit meant to help clear dreams and nightmares from the memory of their hosts, Magnolia finds that need to cause chaos and bring forth danger. Her talents at manifesting both dreams and nightmares have gotten stronger, and thus have made her both feared and admired by those within the city and neighboring kingdoms within the Realm of Dreams.

When not working or sowing the seeds of a bit of rebellious chaos, Magnolia stays within the bar "The Lost & Found", playing games or talking and finding new inspirations for her future creations. These inspirations come from those who share their dreams and nightmares with her so that she may bring them to life or temper them!

Be Careful The Information You Share With A Living Nightmare! ♥